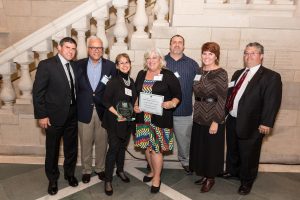 We are so excited to announce that our very own headquarters in Virginia Beach was awarded the Best Commercial/Retail Building Award of Excellence from HRACRE (Hampton Roads Commercial Real Estate). We would like to Andre Marquez Architects, Inc. for their incredible design work. We served as the General Contractor on this project and we couldn’t be more proud of our own work.

Below is the award description from the HRACRE presentation:

GovSolutions, a small business that’s both an office furniture dealer and general contractor, was in need of a brick-and-mortar headquarters that it could design-build-furnish itself. It found a great location on Birdneck Road in Seatack near NAS Oceana in an Historically Underutilized Business Zone. The company chose to erect a 4,000-square-foot pre-engineered building due to cost, ease of construction and because it was a viable solution for its needed office/warehouse/showroom space. As a bonus, the building reflected the company’s typical project inside with its furnishings as well as outside architecturally.

One of the challenges was the building had to withstand jet noise and meet stringent Virginia Beach city ordinances regulating new construction Sound Transmission Class ratings. It had to have increased sound insulation without losing the office area’s open feel and minimal windows strategically placed for daylighting and main road visibility.

The resulting window scheme has had the serendipitous effect of the building becoming known as “the chair building” — great marketing for a furniture distributor.

The end result was a building with a modern industrial look, atypical of standard pre-engineered buildings. Energy-saving sustainable elements include an on-demand hot water system and LED lighting throughout.

Judges’ comments: This simple chair showroom is adjacent to a Naval Air Station which means the designers needed to grapple with a large amount of aircraft noise. The simple box is very clean and reflects the startup company it was purpose-built to house. With a very simple series of masses, glazing and interior finishes the jury felt they created an experimental showroom on what could only be assumed was a modest budget, even if the limited interior color palette of black, red and gray could have been improved upon. The jury particularly liked the angularity of the front of the structure, with its pushed-in entry way, as well as the building’s expressive use of simple metal siding and underlying structural grid. Clear photos of both the interior and exterior reinforced the impression that this structure would be a great place to work.

We are an authorized Herman Miller dealer. 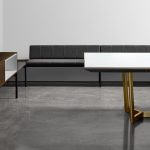